Strange neurological symptoms do happen as an extra hepatic manifestation of HCV.

HCV is not the only cause of neuropathy so if you treat your HCV and it does not get better we would need to look for another cause.

Thank you very much for your prompt reply Dr Freeman.

I haven't started tx yet but will keep this in mind that if this sensation doesn't go away we will have to look for other causes.
Aside from this extra hepatic" symptom" - which is kind of new - I also have - a lot of fatigue and insonmia so I iam really looking forward to tx and a cure.

I had a very interesting patient, who, prior to treating people with HIV I would have thought was mad.

He had whole body tingling (a very unusual thing).

Anyway on treatment the tingling started to go.

First from the middle, then from elbows down, then wrists, then fingers, then gone.

Quite remarkable and certainly an improvement.

Diabetes is very common in patients with HCV and can cause neuropathy so that is a good one to look for.

It is so interesting that you mentioned Diabetes Dr. Freeman. Thank you so much for your kind attention.

I was just thinking about it since I have a very sweet tooth (it runs in the family) and lately I noticed that I have been craving more sugar than ever before. I will ask my doctor to check for Diabetes next time I see him. By the way the tingling in my feet and sometimes cramping are getting more frequently as well. These extra hepatic symptoms all started in the last few months only and as a "coincidence" my last week's VL and insulin levels came up the highest since I have been diagnosed with HCV about nine years ago.

I have had similar symptoms of skin itching or burning for years. They have abated a little since treatment but still flare up at times.
I also get muscle cramps sometimes which I relate to too much carb or sugar consumption. I do try to limit consumption of these and definitely have less cramps if I eat mainly vegetables and fruit with some protein and fats like nuts, avocado and eggs, but some carb heavy foods taste so good especially on cold winter days.

Hi Sonix thanks for your reply. It helps "psychologically" to know I am not alone with these odd sensations. Thanks also for the tips on what to eat. I am such a glutton consumer of cakes, ice creams and chocolate.

But I see it is time to change my diet to healthier choices before I start tx. I heard we should def cut down on sugar. Good luck with overcoming all the cramps, itchy skin and that unpleasant burning for once.

Since I was diagnosed with Hep C in 2013 I have had on going attacks in which I would wake in the early hours of the morning with burning sensations to my mouth (tongue), hands and chest. I would burn up and sweat like if I had a fever and then become freezing cold.
These symptoms would also occur after eating bland food or drinking water where I would burn up with the sweats , have heart palpitations, feel nauseas and have abdo pain. I saw several gastrologists and they all thought it had something to do with outside their field of expertise. In other words that didn't have a clue. It's always present and the intensity comes in cycles

Hi Stew-H thank you for sharing your "out of doctors expertise" symptoms with us. Man those are abundant and sure sound unpleasant. Sorry to hear they are still present and that the intensity comes in cycles. I would assume they'd get better once Hep C is cleared? There is so much we still don't know. As far I was a month and three weeks ago regarding these odd sensations - when I first came to this site to inquire about treatment options - I have been on Sof/Led and some of that burning is dissipating. Also the tingling in my toes and numbing of my hands seem to have diminished. I have since then learned about Cryoglobulinemia - a "disease" that can be associated with the Hep C virus. In fact I tested positive for two of them. Hence feeling worse during winter. These globulines react in cold temperatures. Maybe that is what you have as well.? Have you ever done a cryoglobulines blood test? Best wishes and hope you find a cure and that the burning sensation as well as all those " things" diminish and eventually disappear to you too.

Thanks so much for posting this, Meg! I have been looking into this, and while I have not been tested for Cryoglobulinemia, have had all of the classic symptoms. It is astounding that physicians here in the US seem to know nothing about it, and even when patients have 'Cryo', don't seem to know what they are looking at, or that it is even associated with HCV.

The arthritis aspect of the disease is particularly concerning to me since I have had a Birmingham hip resurfacing for my left hip, a complete hip replacement for my right hip, and recently a surgery to correct a severe spinal stenosis. All since 2010. Since I have or had other symptoms associated with 'Cryo', I am looking at this very hard as the source of severe joint issues for which there is no family history.

This is really terrible stuff, and another compelling reason to get treatment for HCV as soon as possible. An excerpt from the article Meg posted follows:

"In a French study of 36 patients with type I cryoglobulinemia, skin or vasomotor symptoms were present in 75%; nephropathy in 30%; and neuropathy in 47%. The underlying B cell disease was a nonmalignant monoclonal gammopathy in 36% and hematologic malignancy in 64%.Treatments included fludarabine and rituximab-based regimens. Five-year survival was 82%.[3]" 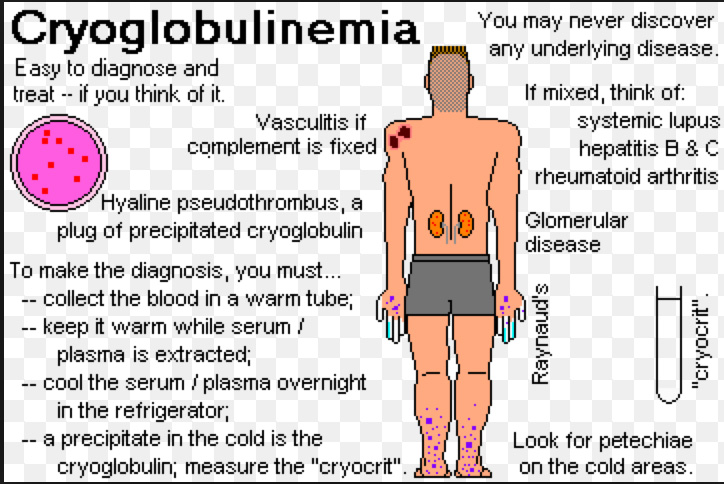 Please elaborate, Price. I know for me this is something of a bombshell, and I'm sure there are others here suffering from HCV related joint problems as well.

There are many things that can cause joint problems.Let me count the ways
1. Cirrhosis can cause osteoporosis.
2. HCV can cause a type of arthritis that resembles rheumatoid arthritis.
3. HCV causes insulin resistance. Insulin resistance causes the excretion of magnesium and calcium in the urine..
Osteoporosis is another potential problem resulting from insulin resistance. Insulin is a master hormone which controls many anabolic hormones such as growth hormone, testosterone, and progesterone. In insulin resistance, the anabolic process is reduced. Bone is built upon the command of such hormones. When these hormones are reduced, the amount of bone building is reduced, and the amount of calcium excreted is increased.
4. The hyperinsulinemia (high insulin levels) caused by insulin resistancre prevents the absorption of calcium which causes osteoporosis..
5. Low Vitamin D which many of you have. In order for calcium to be utilized, vitamin D must also be present in adequate amounts.
6. HCV can cause diabetes....which causes calcium to be lost in the urine.
7. Diet deficient in protein,and high in carbs which can lead to insulin resistance.
8. Chronic inflammation
9. Obesity...because it causes insulin resistance.
10. Patients with degenerative and age-related diseases generally display a low antioxidant status. Imbalances in the cellular levels of prooxidants and antioxidants induces oxidative stress, which is a contributor to the etiology of various degenerative diseases.
11. Medications that can cause insulin resistance.

All of this makes a lot of sense, Price.

Haven't talked about 4 week labs much, but the progress that has been made is rather incredible. Several areas that were abnormal have just snapped back into the normal range like a rubber band. One of those is Glucose, which had been on the high side for years, now solidly in the normal range, along with just about everything else.

Still have a slight calcium deficiency and had started taking Vitamin D to see if that will help.

More than anything, I am beginning to see effective DAA treatment as a sort of panacea for HCV sufferers. This stuff is a real miracle! It is becoming clear to me that this disease is so much more than just a liver ailment. It really appears to be an entire package - a syndrome if you will with the HCV virus at its core, wreaking absolute havoc throughout the entire system.

I have to think that if the health care system looked, really looked, at the big picture with regard to the cost/benefit relationship of curing HCV Syndrome, the standards for initiating treatment would have to change dramatically. However, it is clear to me that this information has not been compiled, cross referenced and presented in an effective way to the medical community, because most of them don't seem to have the slightest idea about it. The level of ignorance is tragic, and astounding!

Fitz it is as if you are reading my mind.

And I am having to rethink my opinion of my GP.

He and the former one (who left the practice to work with remote indigenous communities) encouraged me strongly to take very high doses of Vitamin D3 and many antioxidants - Resveratrol, ALA and others, and a few other things.

So, what the HCV was draining my body of I was putting back. Yeah it costs but fortunately I make OK money in my job, which I am convinced I was able to perform because of those things and others.

Since starting treatment I have been able to smash it out in my job (IT manager for a bank - yes, yes I know) and it's getting noticed

Since EOT I've noticed a preference for bad food but I think maybe that is me relaxing the strict rules I was putting on myself. Time to go back to them probably, otherwise I'll end up looking like a small whale rather than a mermaid

because most of them don't seem to have the slightest idea about it. The level of ignorance is tragic and astounding!
Wait a minute, I just gave you the answer.