What usually patients ask is 'Is Hepatitis C curable?'. This is a 'yes' or 'no' question. What patients should really ask is 'How curable Hepatitis C is?'.

In 2013, Hepatitis C was curable in about 50% of cases. The golden standard treatment, based on interferon and ribavirin, was successful only in 1 out of 2 patients. However, the new sofosbuvir-based regimen developed by pharmaceutical giant Gilead Sciences has drastically increase the cure rate of Hepatitis C.

While these new medications will cure many people, you should nevertheless be aware that there are no 100% guarantees in life, even when it comes to wonder drugs. Although it depends on many factors the "cure" rates are expressed in terms of SVR - "Sustained Virological Response". SVR is typically measured 12 or 24 weeks after the cessation of treatment.

The relatively small study sizes also render these numbers prone to a variable margin of error.

The odds are in favour of cure but there are no guarantees. Longer treatment courses and medication changes will be required for some patients.

We have already seen patients with very low (<15 viral loads) but still having detectable RNA towards the end of 12 weeks. If you are one of this unlucky group you must be prepared to continue treatment for another 12 weeks probably with Sofosbuvir+Daclatasvir+Ribavirin. See below for details.

Having no viral RNA detectable - a zero viral load at the end of treatment - is very encouraging but we know that some people will relapse. What this really means is that although we could not measure any Hepatitis C RNA there must still have been a viable viruses left in that person's system. The experience with PEG Interferon is that relapse usually happens pretty soon after treatment stops but you won't really know you're cured until we test viral load a year or so after treatment.

Historically SVR was measured 24 weeks after the end of treatment and a zero viral load at this point predicted a less then 1% chance of relapse. Recently if has been found that only 2% of people with SVR12 will relapse by the SVR24 time point.

SVR52 represents having no viral load 52 weeks after finishing treatment. With this the chances of relapse are so close to 0 it's reasonable to claim permanent cure.

You should note that even with SVR and a zero viral load (cured) you will remain Hep C Antibody positive almost indefinitely.

When we went in search of testing we found that there are only two facilities in Australia who have NATA certification to do the full range of testing required. We approached the National Medical Institute and found they were already familiar with sofosbuvir having analysed it in relation to customs seizures.

The point being although it is legal to import medication for personal use customs job is to prevent illegal imports, so make sure all your paperwork is in order.

We are aware of some patients having handed over good money but never receiving any medication.

We already know that 75% of all viagra sourced online is fake. Viagra is relatively cheap compared to hepatitis C medication so the financial incentives to produce fakes are far stronger. We are yet to test any medication imported by patients and find it fake, however production of fake sofosbuvir is definitely underway and the size of the problem is only going to increase over time.

This patient did start off with a viral load of nearly 10,000,000 but at the midpoint of treatment we still have detectable virus. 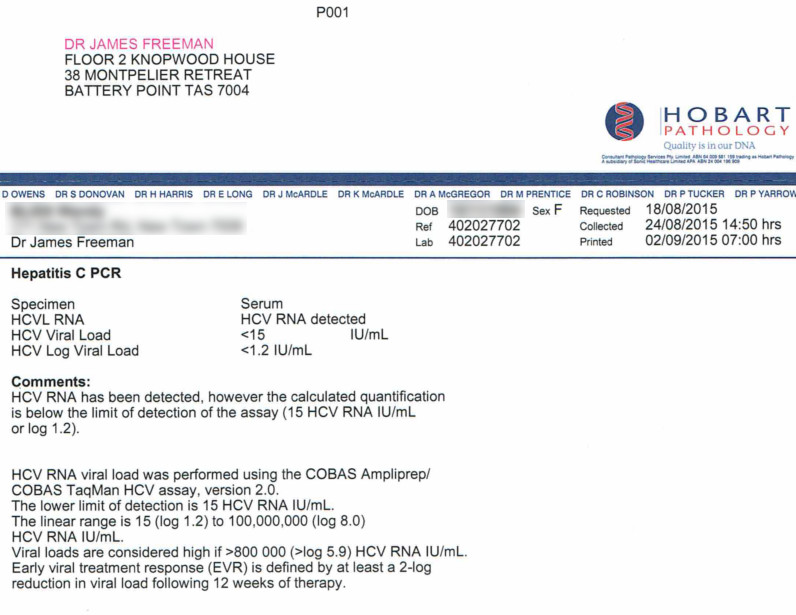