Our results were first presented at the EASL International Liver Congress in Barcelona in April 2016 as a late breaker. We presented updates at CROI and AASLD later in 2016 and presented the final results of the 448 patients who participated in REDEMPTION-1 at the EASL ILC in Amsterdam in April 2017

What does it mean to be Hepatitis C free?

The new Hepatitis C medications are very effective, but what does actually mean to be Hepatitis C free?

Hepatitis C is an unpleasant disease, but one that progresses slowly. As a result of this slow progression, many patients put down the symptoms of the Hep C simply to getting old. It is only when they treat that they realise many of the things they had been putting down to old age were actually symptoms of HepC. A common comment is "I have not felt this good for 20 years".

Common benefits of being cured include:

To hear what real patients say please visit our forum or read some of our case studies and hear directly from real patients who have chosen generic Hepatitis C medications to secure their cure.

Here is what treatment looks like on paper. The results are black and white. As you can see, Patient 1 started treatment with a sofosbuvir-based regimen on 7th of July 2015. He was Pos* (found positive for Hepatitis C) .  The second blood sample was taken on 4th of August 2015, after only 4 weeks of treatment, and shows Neg as the result and Neg means no HCV RNA was detected in this patient's blood. The impact of treatment on the virus is typically this clear cut, indeed, within 4 weeks the majority (78%) of patients will already have an undetectable Hepatitis C PCR viral load. 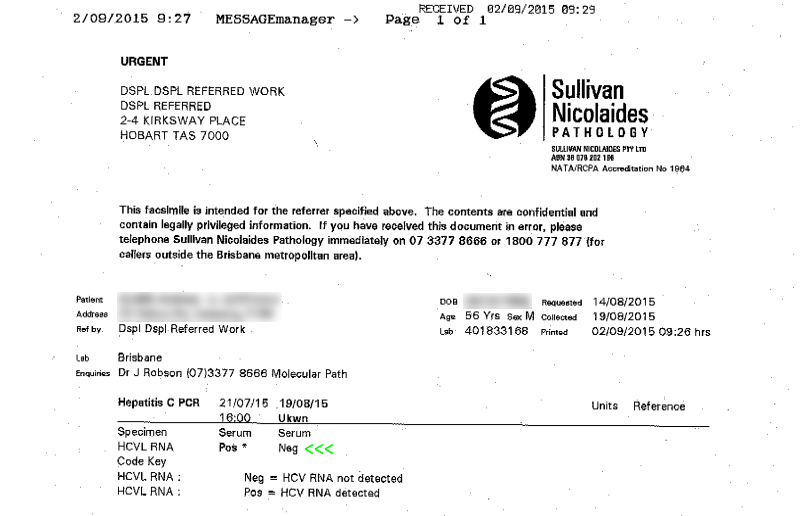 Click here to learn how to get the same results.