Increased AST/ALT ratio during and after treatment

Trying to better understand my current liver status I’ve started to check for AST/ALT ratio and compare it with reported cirrhosis cases in this and other forums and one thing I’ve realized is that people with no cirrhosis report before treatment with <0.8 AST/ALT ratio would get a close to 1 ratio during and after treatment even with substantial drops in Fibroscan score that would technically put them in the corrhosis category according to the ratio.

Any ideas? Was this reported in any study?

The usual case is that the ALT is higher than the AST.

When the AST becomes greater than the ALT we say "The AST/ALT ratio has flipped" or in the terms you're using the AST/ALT goes from < 1 to > 1 because the AST is the bigger number.

It's a rule of thumb rather than a hard and fast thing. We see the AST > ALT mostly in cirrhotics with Hep C but alcohol and fatty liver can also cause it.

It's nothing more than a rough measure.

The usual case is that the ALT is higher than the AST.

When the AST becomes greater than the ALT we say "The AST/ALT ratio has flipped" or in the terms you're using the AST/ALT goes from < 1 to > 1 because the AST is the bigger number.

It's a rule of thumb rather than a hard and fast thing. We see the AST > ALT mostly in cirrhotics with Hep C but alcohol and fatty liver can also cause it.

It's nothing more than a rough measure.
But have you noticed that people that have “normal” ast/alt ratio before treatment <1 usually gets a higher ast and equal and lower alt after treatment?

If you take a look here at the forum, there’s plenty of people that got equal or >1 ratio during treatment and mantained this ratio after SVR.

So their general AST/ALT levels decreased but the ratio increased.

I thought it was interesting.

Any ideas what it means? Is it relevant?

Can you have a low ratio and have cirrhosis and a high ratio and not have cirrhosis? How good is the ALT/AST ratio for predicting that? Is it more reliable before treatment and unreliable after treatment?

Because if we take the ratio alone, that would mean that the treatment is making people cirrhotic and we know that’s not the case.

I know this is not important in the big picture and my questions are silly, but I’m curious why this happens.
The following user(s) said Thank You: Sven, hanknassi, Mar

Less More
4 years 4 months ago #26123
So their general AST/ALT levels decreased but the ratio increased.

I thought it was interesting.

Any ideas what it means? Is it relevant?
The AST/ALT ratio is a rule of thumb and of marginal utility. It certainly only applies to AST and ALT over the normal range.

1) The normal range represents the 95% confidence intervals on a normal distribution of AST and ALT values in well people
2) With the mean value for AST expected to be 25 and the mean for ALT expected to be 22.5 it follows that slightly over 50% of people will have AST > ALT
3) With Hep C (and certain other liver insults) we see the ALT rise higher and faster than AST. 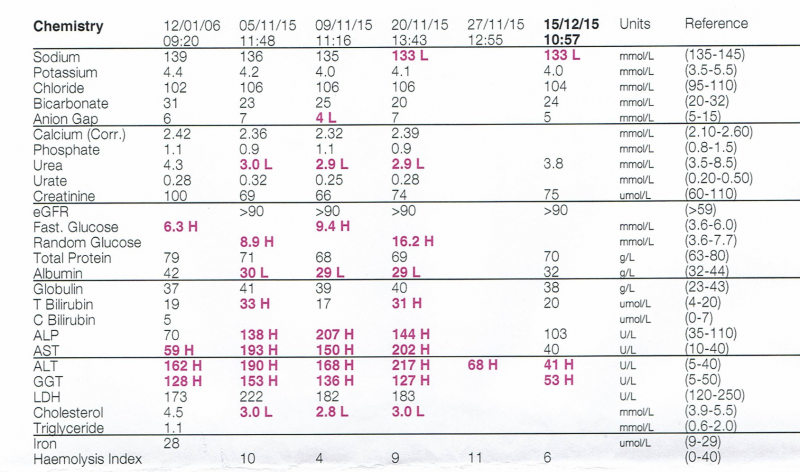 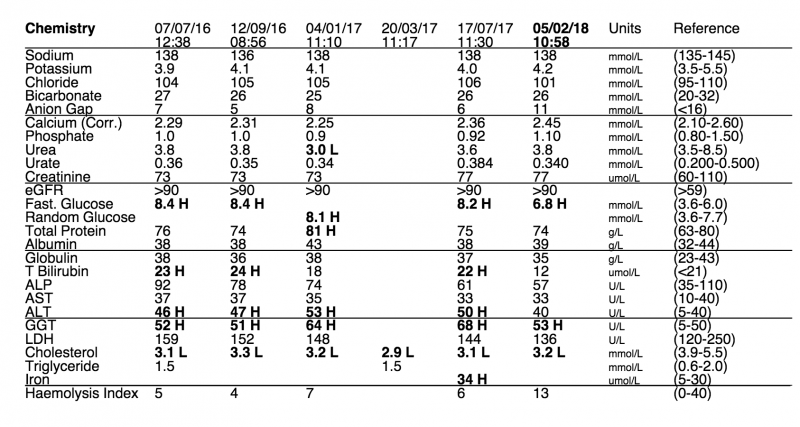 That chart is amazing! Thank you very much!

I’m worried about one thing and I was hoping you could help me once more.

My urine exam says that my bilirubin is ok but my Urobilinogen is hight. The max is 1 and mine is 4. Some places say this happens in hepatitis, other places says it happens on cirrhosis. Other sites says the exact oppostive happens in cirrhosis and the value would be lower. My urine bilirubin is normal except for the direct bilirubin and my urine bilirubin is negative. I mean, I think is negative because it’s listed as biliary pigment. Is it increased Urobilinogen a common find in chronic hepatitis c without cirrhosis?

I’ve used every single cirrhosis calculator I could find. Fib-4, Forns, Apri, AST/ART, NAFDL Score and others. All of them are negative, but I’ve read that this scores are useless in young patients younger than 36 and I’m currently 35. How reliable are these scores?

Also, I had chicken pox when I was little, should I vaccinate against herpes zoster before starting treatment?

I’m sorry for all these questions, but I’m anxious and I’m lost. The possibility of having corrhosis scares the hell out of me as I’m sure scares everybody so I’m trying to get some peace of mind using Google which is never a good thing, this is why this chart will be so helpful.

I promisse my next post will be a happy cured one.

It's normal to feel anxious and lost with Hep C. It's a pretty lonely disease to have given nobody talks about it.

It's unlikely that you have cirrhosis, however, if we keep worrying long enough and not treating you will eventually get there!

On the pragmatic side, you are also overcomplicating it and yes, you do worry too much about minute details.

The single best health intervention for someone with Hep C is to get rid of it. Then we can see what we are left with which will probably be not very much with somebody as young as you are.

I recall that you're a big man and I've sent you my weight loss tips - these work really well. A patient yesterday has gone 125 kg to 65 kg over the last 8 months following the "Get enough protein and be calorie deficient and it will not only work, but it will keep working". There's more to it than that of course, but weight can be fixed too. It's not as easy as the pill a day Hep C cures, but it's not as hard as people think. I'm not much of a conspiracy theorist but it does strike me that the diet industry has a vested interest in their various wares working just enough to keep people hooked - like small jackpots from slot machines.

Google is both your friend and your foe. Without it, you probably would not have found us, but it does provide a lot of worrying information. I can assure you that almost all student doctors diagnose themselves with diseases they read about - welcome to the club of "a little bit of knowledge is a dangerous thing".

Keep asking questions - the more you know the less you will worry about things that don't require your attention. There are no stupid questions, only stupid answers.

Wait? What? 125 to 65 in 8 months? That’s amazing! I’ve started to follow your book and it seems to be helping. I’m not hungry all the time like I used to be and I agree that the food industry manipulates us. Even internet companies try hard to get us addicited, why wouldn’t the food industry do the same? I don’t think it’s a conspiracy theory at all.

I’m already dieting and managed to lose 5kg so far until I wait for the medicine to arrive.

Thank you very much for your support and your kindness. I can’t wait the moment to say here at the forum I’m cured.

That's good going on the weight.

Time is your big friend with weight loss. The average person needs 18,000 calories a week, there are 9,000 in a kg of fat so ... on 1/2 rations ~1 kg a week is about where it settles. When you're heavier you can get close to 1.5-2kg a week but it slows down pretty quickly. Any way you look at it you need to be able to sustain the effort over a good period so it's a matter of working up a customised plan that suits the person.

The key bits about protein are that:

Got it! So, the trick is to lose the fat without losing the muscle.

The thing about carbs is so true. When I'm hungry I look for carbs and when I eat it, an hour later I'm hungry again and sometimes not hungry but craving carbs.

I don't know how I let myself get into this situation, but the important thing is that I'm having a great opportunity to fix it, so that's the good part.

It's funny how we get used to carry two sacks of cement and not notice. I mean, it's not comfortable, but it doesn't feel like if I was carrying 50kg that it's a short woman weight. That's insane.

Thank you for all your help! You're helping me a lot and I'm really grateful for that.

Your awesome - good on you for making all these positive changes. Imagine how great you will be feeling when you kick the virus. You will be rocking it!

My vice was to reach for a chocolate bar or a bag of crisps when I hit the afternoon fade. Strangely or happily enough that fade has disappeared since starting on the treatment. Much easier now to settle for the healthier option of an apple or crackers. Not saying chocolate still isn't one of my favourite things, but I don't feel the urgency that I had previously.

Good luck with everything

Thank you very much for your kind words

Interesting. I must say I learn something new every single day.
In good health.

8 week quantitative bloods: September 14th. I have been diagnosed as <15 (told undetected)