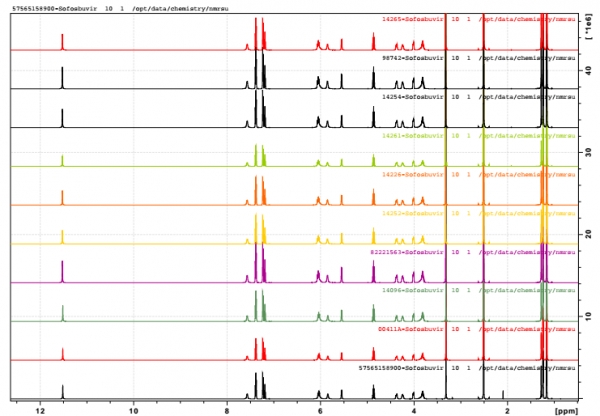 So what is this image? It is a patient safety check. Each coloured line represents a single patient's self imported Sofosbuvir being tested against a reference standard. Yes it's just lines but for each chemical there is a unique NMR signature represented by the spikes in those lines, but let's rewind.....

Back in February when patient zero asked me to help them personally import Hepatitis C medication the conversation went like this:

So the medication arrived, it did pass testing, patient zero took it and at 4 weeks the pathology company rang up to say:

So patient zero was really supposed to be a one off and was in fact sworn to secrecy, something he honoured.

The problem was I had asked some expert doctors for their opinion, and when patient zero hit VL=0 they started sending me patients who faced the options of parallel import, interferon or death.

So one patient became several, and several became more. With each passing week more people saying "I'm better" and the validation of VL=0.

While the initial testing was robust the lab that did it was careful to inform us that they were not NATA accredited to do testing, so with that in mind we went in search of a NATA accredited lab.

These APIs have also been cross checked in Australia by the NMI (National Measurement Institute) which is NATA (National Association of Testing Authorities) accredited to perform testing. Only the Department of Defense and NMI have NATA accreditation to perform this testing.

If you happen to be a laboratory looking for real NMR data in multiple solvents, 1H, 13C, 2D, here it all is in one place:

More in this category: « The Trans-Pacific Partnership: the dirtiest trade deal, you've never heard of Lismore Liver Clinic Now Able To See Patients »
back to top