The Lancet - What is the impact of treatment for hepatitis C virus infection? 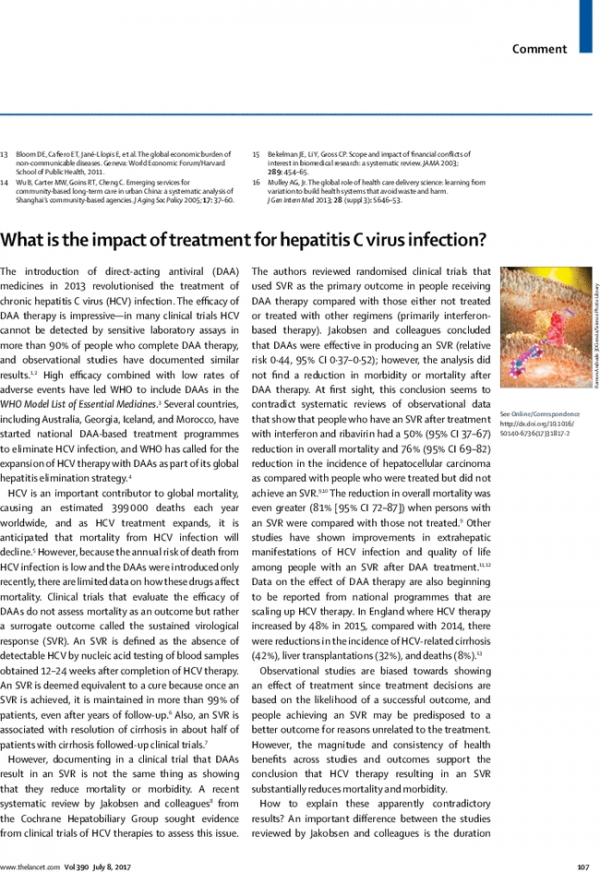 This article was just published in the Lancet

The introduction of direct-acting antiviral (DAA) medicines in 2013 revolutionised the treatment of chronic hepatitis C virus (HCV) infection. The efficacy of DAA therapy is impressive—in many clinical trials HCV cannot be detected by sensitive laboratory assays in more than 90% of people who complete DAA therapy, and observational studies have documented similar results.1, 2 High efficacy combined with low rates of adverse events have led WHO to include DAAs in the WHO Model List of Essential Medicines.3 Several countries, including Australia, Georgia, Iceland, and Morocco, have started national DAA-based treatment programmes to eliminate HCV infection, and WHO has called for the expansion of HCV therapy with DAAs as part of its global hepatitis elimination strategy.4

HCV is an important contributor to global mortality, causing an estimated 399 000 deaths each year worldwide, and as HCV treatment expands, it is anticipated that mortality from HCV infection will decline.5 However, because the annual risk of death from HCV infection is low and the DAAs were introduced only recently, there are limited data on how these drugs affect mortality. Clinical trials that evaluate the efficacy of DAAs do not assess mortality as an outcome but rather a surrogate outcome called the sustained virological response (SVR). An SVR is defined as the absence of detectable HCV by nucleic acid testing of blood samples obtained 12–24 weeks after completion of HCV therapy. An SVR is deemed equivalent to a cure because once an SVR is achieved, it is maintained in more than 99% of patients, even after years of follow-up.6 Also, an SVR is associated with resolution of cirrhosis in about half of patients with cirrhosis followed-up clinical trials.7
However, documenting in a clinical trial that DAAs result in an SVR is not the same thing as showing that they reduce mortality or morbidity. A recent systematic review by Jakobsen and colleagues8 from the Cochrane Hepatobiliary Group sought evidence from clinical trials of HCV therapies to assess this issue. The authors reviewed randomised clinical trials that used SVR as the primary outcome in people receiving DAA therapy compared with those either not treated or treated with other regimens (primarily interferon-based therapy). Jakobsen and colleagues concluded that DAAs were effective in producing an SVR (relative risk 0·44, 95% CI 0·37–0·52); however, the analysis did not find a reduction in morbidity or mortality after DAA therapy. At first sight, this conclusion seems to contradict systematic reviews of observational data that show that people who have an SVR after treatment with interferon and ribavirin had a 50% (95% CI 37–67) reduction in overall mortality and 76% (95% CI 69–82) reduction in the incidence of hepatocellular carcinoma as compared with people who were treated but did not achieve an SVR.9, 10 The reduction in overall mortality was even greater (81% [95% CI 72–87]) when persons with an SVR were compared with those not treated.9 Other studies have shown improvements in extrahepatic manifestations of HCV infection and quality of life among people with an SVR after DAA treatment.11, 12 Data on the effect of DAA therapy are also beginning to be reported from national programmes that are scaling up HCV therapy. In England where HCV therapy increased by 48% in 2015, compared with 2014, there were reductions in the incidence of HCV-related cirrhosis (42%), liver transplantations (32%), and deaths (8%).13
Observational studies are biased towards showing an effect of treatment since treatment decisions are based on the likelihood of a successful outcome, and people achieving an SVR may be predisposed to a better outcome for reasons unrelated to the treatment. However, the magnitude and consistency of health benefits across studies and outcomes support the conclusion that HCV therapy resulting in an SVR substantially reduces mortality and morbidity.

How to explain these apparently contradictory results? An important difference between the studies reviewed by Jakobsen and colleagues is the duration of follow-up, which was short at an average of 34 weeks compared with an average of more than 5 years in the other reviews.9, 10 Simply put, the clinical trials included in the systematic review by Jakobsen and colleagues were not designed to answer the question posed by the authors about the effect of DAA treatment on morbidity or mortality. These studies generally followed up patients for only 24–48 weeks after the completion of DAA therapy, and the risk of HCV-related disease and death during such a short period is extremely low because the harmful effects of chronic HCV infection take years to develop. In fact, no morbidity was reported, and only 16 deaths occurred among the 2996 patients enrolled in all the DAA trials that were assessed by Jakobsen and colleagues. Thus, the statistical power to show a difference between the two groups is very low. In addition, the non-intervention groups in many of the studies included in Jakobsen and colleagues' systematic review did in fact receive HCV therapy, primarily an interferon-based regimen, which would minimise any mortality benefit of DAA therapy. Finally, Jakobsen and colleagues' study included early, less effective DAA regimens that were discontinued or withdrawn before marketing. They propose that, to resolve definitively whether DAA therapy reduces morbidity and mortality, randomised clinical trials with a non-treatment comparator group be done with clinically relevant outcomes such as death. Clearly, with the ready availability of safe and effective DAAs and ample evidence showing the health benefits of achieving SVR, such a study design is unethical and would be unacceptable to institutional review boards and harmful to patients' health. Several organisations, such as patients' groups and international hepatology associations, have expressed their concerns about the methods and conclusions of the Jakobsen review.14, 15, 16

People who are knowledgeable in the field of HCV therapy can readily ascertain the limitations of the approach taken in the systematic review by Jakobsen and colleagues and will be able to place their results in the proper context relative to other data that document the health benefits of DAA therapy. But for some patients, health-care providers, and decision makers who may be less knowledgeable about HCV therapy, this type of analysis, especially as reported in the mainstream media,17 could lead to conclusions that DAA therapy has no benefit, resulting in decisions to decline to prescribe or take DAA therapy or to decline to approve budgets for DAA treatment programmes, particularly in view of their expense. This would be a tragic outcome, as it would lead to preventable deaths. Public-health policy makers who must decide on budget allocations for HCV treatment cannot wait for perfect data on mortality endpoints, since the types of trials that would generate these data will never be done. Rather, they must assess available, albeit imperfect, data from observational studies and trials using surrogate outcomes that are reliably predictive of clinically important outcomes. Based on the fact that DAA therapy is safe and effective in achieving SVRs, that the SVRs are durable in most patients, that HCV-induced liver damage improves after SVR, and that observational data show a large reduction in morbidity and mortality, health-care decision makers and providers can take comfort that the evidence is strong in favour of treatment. A more definitive assessment of impact on morbidity and mortality will take time, but this should not be used as a reason for denying HCV therapy and delaying efforts to eliminate HCV infection.

More in this category: « How do I fix my insomnia EASL Response to the Cochrane Systematic Review on DAA-Based Treatment of Chronic Hepatitis C »
back to top